Crankworx can be a heady beast. With so much to see and do it can be easy to be overwhelmed by the choice of what to do next. With the who’s who of mountain biking in New Zealand making the pilgrimage to Rotorua for the 5-day event, we took up an offer from Nelson based importer Hyperformance Hardware to get out on trail with some very trendy new Santa Cruz models. With the 5010, Bronson and Nomad on hand, the task of putting the U.S of A’s finest carbon products to the test was something we weren’t going to argue with! Not to be outdone, the ladies of Crankworx were also well taken care of with the full range of Santa Cruz’s sister brand Juliana also on offer.

Lapping the Skyline Bike Park tracks, we made the call to start small and work our way up the range. It’s worth noting that having come from a DH background and having spent more than my share of time riding a Santa Cruz V10 in anger, I was looking forward to the tail end of the test on the venerable Nomad. On trail the 5010 was a revelation. Granted the Skyline Rotorua Bike Park isn’t filled with the steep tracks or technical root sections that can be found in the nearby Redwoods and elsewhere in NZ, the 5010 excelled highlighting it’s light-footed, nimble, playful approach to the trail that had you flicking and cutting at every opportunity. The Fox Float CTD Evolution shone and felt more like 6” of dampened pleasure, soaking up the increasing brake bumps without feeling like bogging down in the bends. Perhaps the only shortcoming came in the form of the Fox 32 fork equipped up front on this particular demo. Never one to shine even when it was new on the block, the 32 has now been replaced by the all-conquering Rock Shox Pike as the stock fork and we don’t doubt this will elevate the bike to even greater heights. Next up was the Bronson, a bike I’ve wanted to throw a leg over for a while and one that has been selling like hot cakes throughout the country. With a 67° head angle, 13.62” BB height, 17.28” chainstays and 150mm of travel, the Bronson is a little slacker, a little longer but a touch higher in the bottom bracket than the 5010.  A genuine do it all bike, the Bronson has become the reference for all-mountain racing and riding in the past year and has proven itself especially popular amongst privateers at enduro races around NZ.

On trail the Bronson lived up to the hype, feeling stable at speed and more than capable of handling anything the Skyline trails could throw at it. Well sprung with a Rock Shox Pike up front and the Fox Float CTD Evolution on the rear, it would have been nice to spend a bit more time fine tuning settings a little with the rear shock feeling a bit harsh, unusual considering the previous 5010 had run the exact same model. Given I normally straddle the border between a large and medium frame, I wasn’t too perturbed at having to sample the larger size given the popularity of the Santa Cruz demo booth. In hindsight however the large felt a fraction long for my liking and I felt more at home on the other two bikes, both of which were Mediums. For 2015 Santa Cruz have stretched the top tube a fraction so this might be worth checking out if you’re in the market for a Bronson of your own. Overall a solid ride and a genuine quiver killer depending on your requirements. Santa Cruz Nomad. More bike than you will ever need (but that’s exactly why you need it!)

Last up, the all-new Santa Cruz Nomad. First introduced in 2005, the Nomad is a classic in the truest sense of the word and has recently been reborn with an overhaul to bring it in line with current industry trends. Sporting geometry that wouldn’t have looked out of place on a full blown DH rig a couple of years ago, the Nomad is the kind of bike you can count on to have your back when the trail gets truly rowdy. With its 65° head tube angle, 13.39” BB height and 165mm travel, the Nomad is designed to solely run one-by drivetrains and hence is capable of sporting some seriously compact (17.05”) chainstays. Combined with a relatively steep seat tube angle and an ample cockpit, the Nomad was also surprisingly nimble on the short climb from the gondola to the top of the bike trails.

Point the Nomad downhill and things simply transform. No longer is this a mild mannered trail bike but instead an absolute monster, capable of demolishing anything thrown in front of it. It might be cliché but the Nomad begs to be opened up. Fast, rowdy descents of the type typically found further south are what this bike lives for but it would be doing it a disservice to say that this bike was simply a heat-seeking missile. Owing in no small part to the tight back end, the Nomad still shone despite the lack of fall line, failing to bog down in corners and snapping its tail wherever you directed it. I’d be lying if I said the bike was even remotely challenged by anything in the Skyline Bike Park and to own such a bike in the North Island in my opinion, would be a gross overkill… But hell it would look hot in your garage. A bike more than the some of its numbers, the Nomad really can hammer down the trail only to cruise back up the other side. 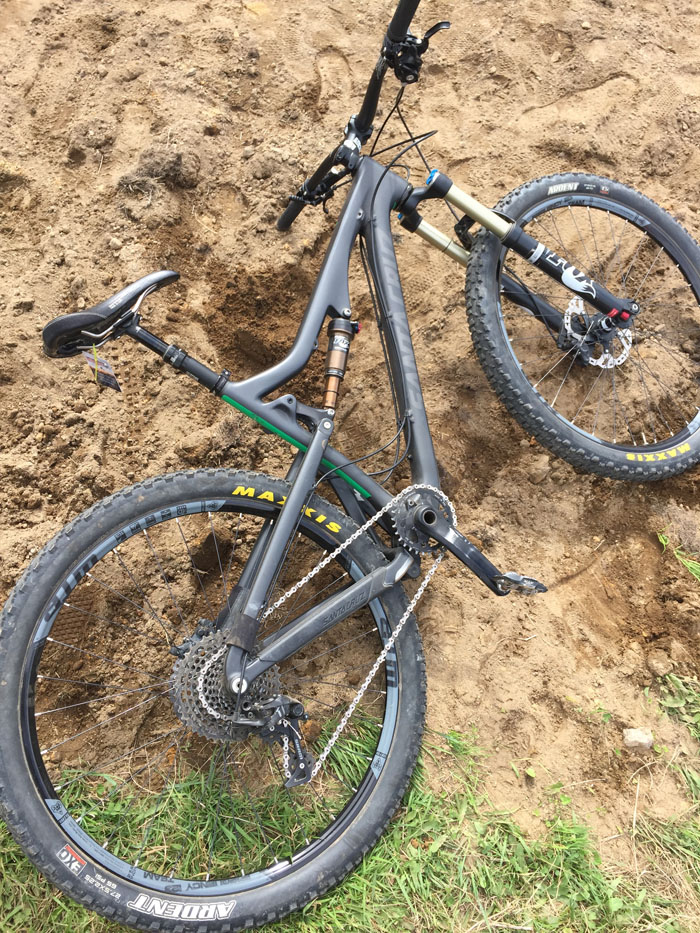 What to take from this tantalizingly short test? Well the Nomad is a beast, but far too much bike for where I ride. The Bronson, if you’re after one bike that will do it all then it’s a difficult one to beat but at times it found itself a little confused. Not slack enough to charge but not tight enough in the back end to flick around, it sits comfortably in the middle as jack-of-all-trades, but not quite master of any. Surprisingly given my initial reservations, it was the shorter travelled, lightweight assassin that won my heart. The downhiller in me shed a tear and maybe I’m getting old but the lively playful ride of the 5010 had me buzzing from top to bottom, unable to wipe the cheek-to-cheek grin from my face. While 160mm all-mountain sleds seem to be de rigueur at the moment, the reality of riding in the North Island means the 5010 is more than enough bike for what you need. Fair enough you may want more when the going gets rough but hey, you can never have too many bikes and there’s always the Nomad right…?

To get a leg over your very own Santa Cruz bike, contact your nearest Torpedo7 store and have a chat. They may not be the cheapest in town but you’ll be the envy of everyone on the trail and they may just remind you why you began riding in the first place. Smiles for miles….

See you out there.