I arrived in Wulong this year pretty pumped. We were back at the race that we all love, the big one, with the same team as last year – defending champs. Mentally I was gee’d up. Wulong always starts with a short prologue on the first day – this year the prologue only involved running… A shift away from the usual Multisport day. After the gun we had a couple of kms to run before we had to carry a Chinese chair – the type with two bamboo poles and the chair in the middle. We carried Simone on this for about 800m. It’s always painful and requires good team work. We did well and exited this stage in 5th equal with Raw Adventure. Raw Adventure were the team winning everything in China this year, so we were happy to be right with them.

After the chair carry we were back running. A couple more km up hill to the start of a GPS orienteering section. Upon entering the transition area we quickly moved past Raw Adventure… It was clear something was not right with Jacky and they were slowing significantly. We pushed past, now neck and neck with Thule. We took some good lines on the o section but so did Thule. We remained in contact for the rest of the stage until Thule pipped us in the sprint at the end to finish 1 second ahead. Our teams were 4th and 5th respectively, a bit of a surprise… 3 Chinese teams had dominated the stage and took the podium spots for the day. I was stoked with the day. I’d felt really good and was able to do my share of the work for the team. Things were looking up for some strong racing over the next 3 days.

The next day was a goodie on paper for our team, with a long 22km paddle section making up a large chunk of the day. We came off this leg in first place and charged into the canyoning section that followed. We were ticking along at a manageable pace and I wasn’t too surprised to see Thule appear behind us.

Exiting the canyon we put the hammer down. We smashed along at a really good pace right through to the mountain bike transition. We were stoked to be on the bike after all running out of food and water on the previous stage. We took off, again moving very well. Roughly 2 km into the ride I was leading our team down a rough rocky 4wd road, I was attacking the descent and was keen to keep the pace on. This is when it happened. I was riding, pumping the bumps, and then I was on the ground. It happened that fast. All I could think as I fell through the air was “no friggin way, how could I have crashed! I can’t have. Not now! Not in this race! Not on that section!”. I was angry. I was pretty sure my handle bar had snapped. Then I was in pain. Lots and lots of pain. And very winded. I’d taken a good whack on the ribs and all thoughts vanished as I simply tried to breath.

“Is he knocked out” “are you ok” “talk to me mate”… The voices of my team bounced around. “Just breath, just breath, it will pass” was all I could think.

Finally I was able to move. I stood, to the relief of my team and I quickly asked if we could just keep moving. I was in lots of pain and a fair amount of shock, so I just wanted to distract myself.

“Ohhhhh, no no, I don’t think so, not just yet… I, I think I see your bone…we need to deal to that”… Marcel was inspecting my right arm, my biggest source of discomfort. He grabbed some duct tape and proceeded to tape my wound closed. It hurt. Lots.

Marcel then gave me his bike and Simone and I started riding slowly, while Sam and Marcel dealt with my bike, which indeed had a broken handle bar.

I swore and swore and swore. It really was sore. Every bump and fern I brushed sent sharp pain down my nerves. The right arm was the worst, followed by my hip and ribs, both knees and finally my left elbow and hand. I’d been rag dolled and the more I thought about it the more I realised how lucky I had been to escape so lightly…

We rode for about 10 or more minutes before we were caught by another team.

I was gutted to be passed and two more teams got us by the time we transitioned to the next stage. My crash had happened 2km into a 20km ride.

After the ride was a 1km run to a bridge where we abseiled into the water before swimming 800m to shore. This was the worst stage of the day for me. The water burnt and stung and it didn’t stop. It was rude, unrelenting and invasive pain. Marcel and Sam towed me while I kicked on my back and fought with my brain. It was a suffer fest, but I knew it was nearly over.

Crossing the line for the day was a relief. But it was also gutting. It just felt like bad luck… To have been racing so well as a team and then be totally owned in a split second… That’s racing I guess… I remained in a somewhat positive frame of mind as I was shuffled into an ambulance and taken to hospital. “It’s just a few cuts, they’ll be able to sew me up and I’ll be away laughing” was what I thought… Well that was the initial treatment… What came next was the infection. Even after good cleaning and being sewn up I still woke the next day to a swollen red arm and again – lots of pain. I could barley get out of bed. Every time I lowered my arm the blood rushed to it and the throbbing was real. The cut was very deep… Dam. There we no way I could race for 2 more days like that. We were out. The biggest race of the year and it was over just like that. The infection grew worse throughout the day, as did the realisation that we had made the right call. Instead of racing I went to hospital again. This was a real experience. A translator from the race came with Sam and I which helped us get treatment very quickly. Entering the doctors theatre I was shocked by the lack of hygiene. There was blood covered swabs in the bin, the floor was splattered with all sorts and everything looked so old.

The doctor removed my bandaging and wasted no time getting stuck in. There wasn’t even a “ni hao” before he cut some of the stitches and got right into the would with cotton buds and tweezers. Oh man, oh man, so it turns out pain killers are are a western idea… With the infection inflaming the wound the pain was almost unbearable. I squirmed on the operating table as he got stuck into my flesh. He squeezed out the gunk and flushed the wound with saline and iodine. I knew it had to be done. I remember clearly every time he got in deep Sam would go “agh ohhh man he’s right in there now” – so comforting haha. By the time he finished I felt ruined. The stress and adrenaline of the experience smashed me. Back to the race hotel and sleep. The next day I was onto IV antibiotics. The infection was pretty bad. More cleaning, more scrubbing, more pain. The infection had spread right up my arm and from my armpit to my forearm it glowed with the redness of infection. Not good. Thankfully that night there was a bit of a revolution in terms of the infection. I awoke in the early hours of the morning, drenched in cold sweat, but I felt great! I knew I was beating the infection and in the morning it was clear that it was slowly retreating. Yussssss! Now I just needed to master the art of using chop sticks left handed and watch the healing begin…

The wound over time : WARNING!! Not for the faint hearted. 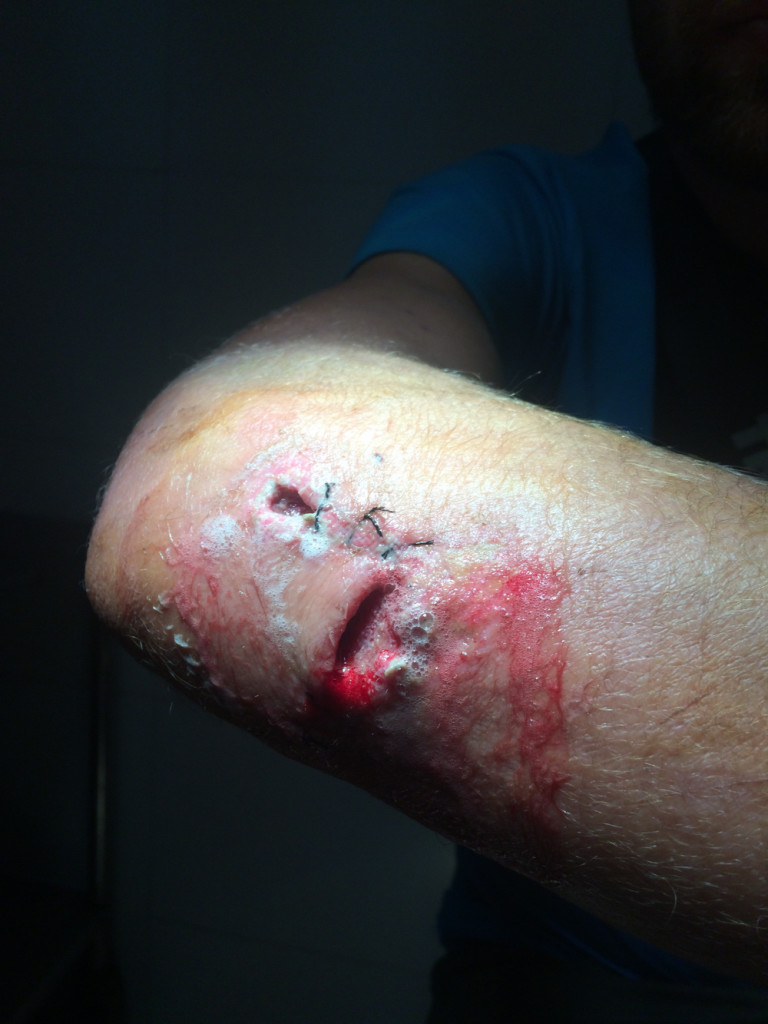 Day 8 – starting to fill the holes Today – looking good to race with on the 19th!

Thanks to everyone who sent through kind messages of support and to my sponsors;

Around the Basin, Torpedo7, Hillary Foods

I’m still in China at the moment, visiting the hospital daily for treatment, but feeling pretty good.